Granny Cole and Aunt Ruthie loved flowers. The evidence could be seen in Granny Cole's flower garden and even in the vegetable gardens. 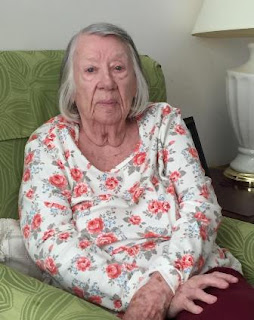 The flower garden was behind the house next to the smoke house. It was a fenced in area awashed with blooms of various sorts, roses, gardenias, and many others. As Granny got older the flower garden became more chaotic, but still a special and lovely place. 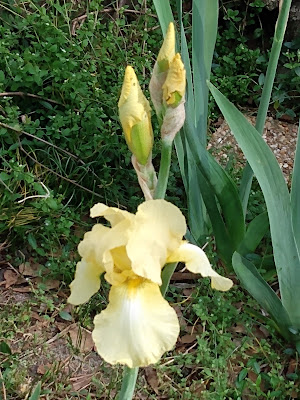 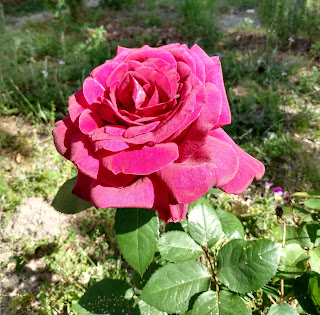 The vegatable gardens, located in different places at different times, but most recently in a field in front of the house below the Rock Garden. Along with vegetables, Granny would plant zinnias and other blooms.

Aunt Ruthie, and probably Granny before that, would cut lovely, long-stemmed flowers and place them in tall vases in the house. One place they looked especially beautiful was in the front hallway of the High Rock house. 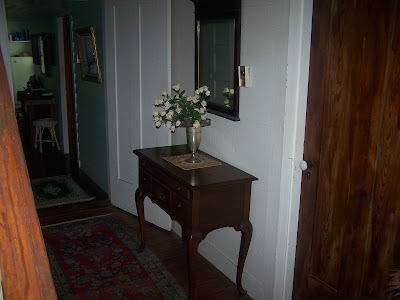 For years, Aunt Ruthie would also supply flower arrangements each Sunday for the front of the sanctuary at Lick Creek Baptist Church. She would gather flowers from the outdoors at Granny's house, and if needed, her sister, Bid's, house.  She might mix in peacock feathers that were always available. And once she even talked her niece (me) into wading into the Yadkin River to collect water lilies. 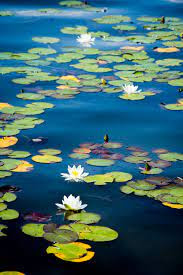 They looked great in the arrangement on Sunday.

Aunt Ruthie was an artist at heart, and although quite prolific in style and subjects, it is easy to see why she had such a penchant for still life flower pictures. 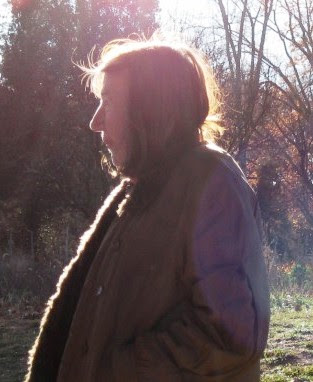 I only wish that we had more photos of  the flower arrangements from High Rock and those that were supplied to Lick Creek Church. But we do have many gorgeous canvases showing her love and appreciation for the beauty of flowers. 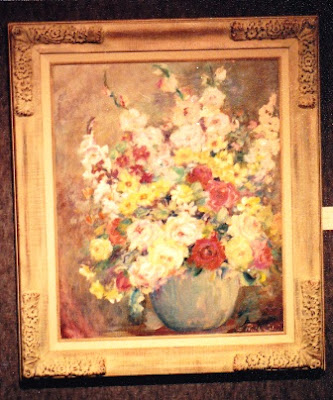 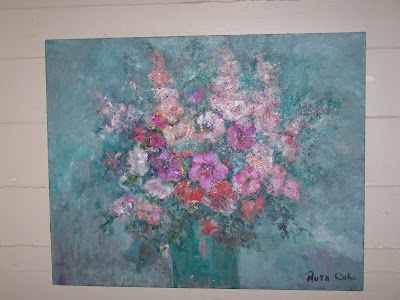 The grass withereth, the flower fadeth:
but the word of our God shall stand for ever.
(Isaiah 40:8)

Posted by JennyJohnson at 6:58 PM No comments: 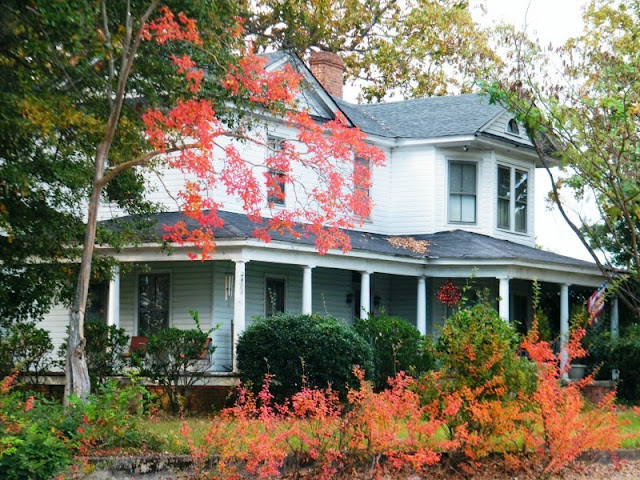 "I can smell autumn dancing in the breeze.
The sweet chill of pumpkin,
and crisp sunburnt leaves."
A. Drake 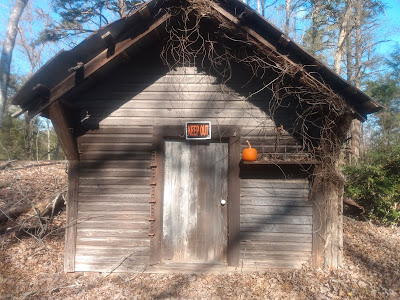 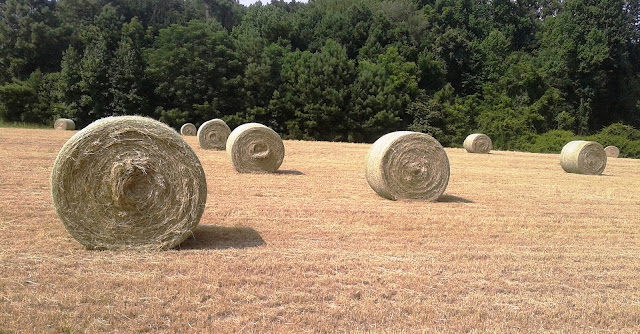 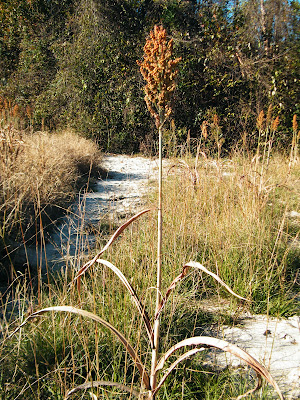 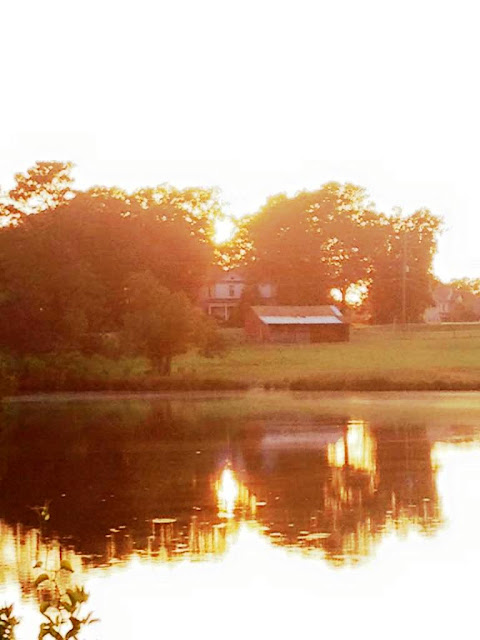 While the earth remaineth,
seed time and harvest,
and cold and heat,
and summer and winter,
and day and night
shall not cease.
Genesis 8:22
Posted by JennyJohnson at 10:06 PM No comments:

In Anticipation of Autumn 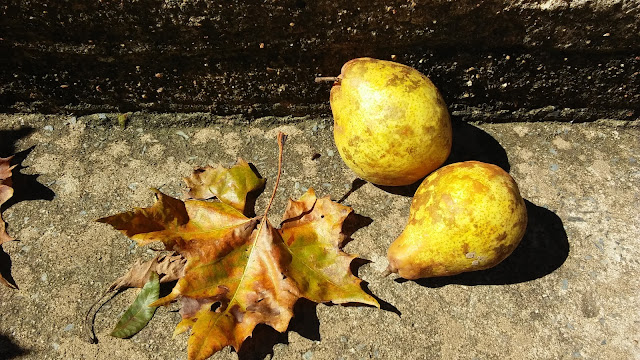 "Ask the Lord of the harvest, therefore,
to send out workers into his harvest field.”
Matthew 9:38

Posted by JennyJohnson at 8:51 PM No comments:

“What sets ... racers apart from less daredevilish mortals is their complete lack of fear and their joy of doing something on the edge. They love to speed because it is dangerous.” ~ Peter Golenbock

My interest in racing---NASCAR style--began in the 1960's, languished for a while, and began again with intensity in the early 90's. I talked about it, gathered autographs and collectibles, and attended races (Rockingham, Charlotte, Darlington and local tracks). My obsession even spilled over to my mother who happened to be in a dentist's office in Charlotte and realized that Chad Little was also there. She waylaid him for an autograph for her daughter. Got to love that! [Ask my girls about an encounter with a racer at Taco Bell to see how crazy their Mom was.]

And then I reached a certain milestone age--and mentioned I wanted to drive for myself. Enter Richard Petty Driving Experience at Charlotte Motor Speedway, June, 1998. I knew I was in trouble when we drove into the infield. The trepidation increased as I put on the driving suit and helmet. 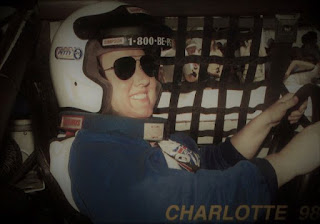 And I really did have to crawl through the driver's side window. 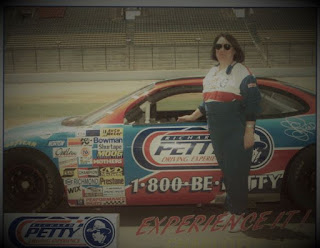 So, eight laps. I could do this!

My son-in-law, Mike, (himself an affirmed daredevilish mortal) was in the next car. He was an experienced race car driver (Wake County Speedway). All I had to do was follow Mike around the track---keep him in my sights---I would be fine. Really. The only problem was...

By the time I drove off of the apron and onto the track proper, Mike was nowhere to be seen. As I said, he was an experienced driver already. Those eight laps around the 1.5 mile superspeedway were some of the longest and most terrifying moments of my life. With a death grip on the steering wheel and sheer terror in my gut, I drove.

“You win some, lose some, and wreck some.” ~ Dale Earnhardt---OK, so I never broke 100 mph, but then again, I didn't wreck (which is more than I can say for a former NC governor). 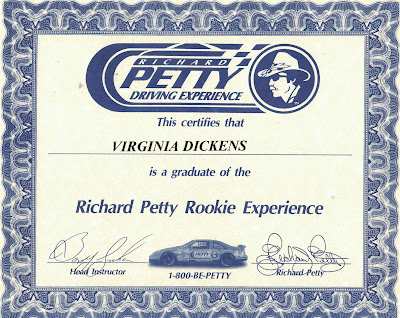 “When I first started racing, my father said, “Win the race as slow as you can.” ~ Richard Petty--  OK, Yes! Lee Petty was right! My philosophy exactly.

“Once you’ve raced, you never forget it…and you never get over it.” ~ Richard Childress---Truth. Am I glad I did? You bet!  Would I do it again? Never! I am content to rest in the laurels of being a less daredevilish mortal.

I do, however, get to live vicariously through my grandson's racing experiences. He takes after his Daddy, Mike (see above). 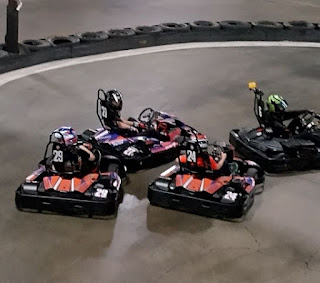 let us throw off everything that hinders and the sin that so easily entangles. And let us run with perseverance the race marked out for us  (Hebrews 12:1b)
Posted by JennyJohnson at 1:45 PM 3 comments: 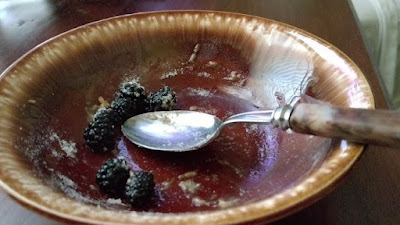 A quick trip to the Holiday House resulted in some summer serendipity.
Litte things, but fun. If a bit off the the beaten path.

Found some blackberries in a patch I didn't know existed. Washed them but didn't have any cake prepared for shortcake...or whip cream. So, broke up a blueberry snack bar, put berries on on top, sprinkeled with sugar and powderded vanilla creamer.
Winner!  (Even if only by chance!)    We're sorry we didn't save you any. 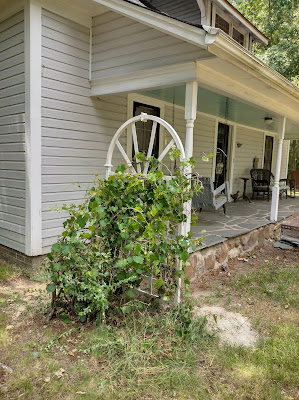 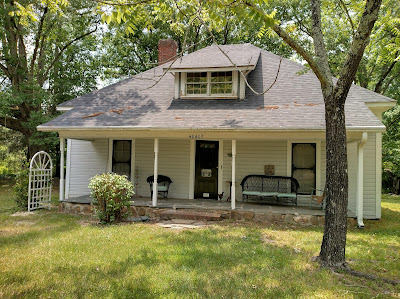 The new trellis is up and holding tight to the grapevine. Looking forward to yummy fall fruits.

Mrs. Buzzard is in residence in her apartment upstairs in the old house. She comes back every year. 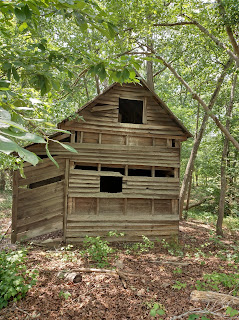 She's not a very social creature, and if you want a glimpse, you'd better look fast! 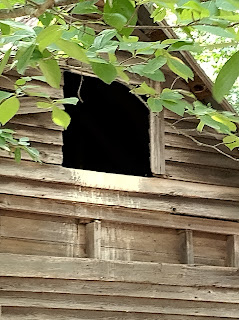 Now you do! And then she's gone. 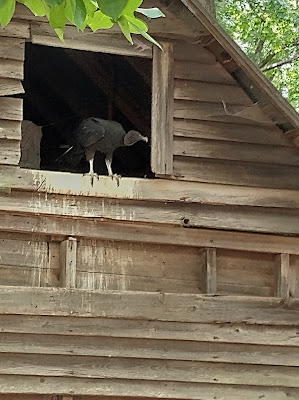 But there were some creepy noises coming from her apartment and a glimpse of something else up there...probably a teenage baby.    Stay away! 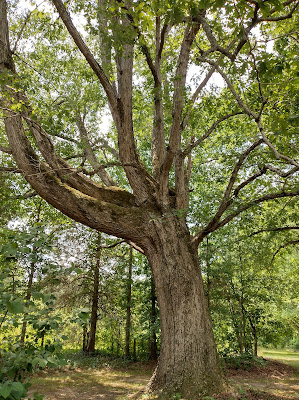 And finally, no picture gives this old man his due. He's huge and magnificent, even if he's seen better days. We'd love to hear the stories he has to tell. 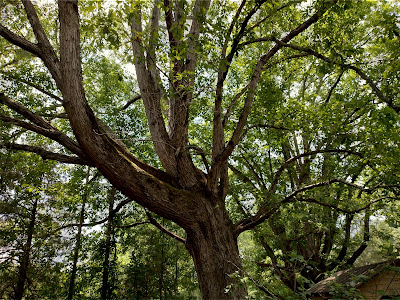 Though the fig tree should not blossom,
nor fruit be on the vines,
the produce of the olive fail
and the fields yield no food,
the flock be cut off from the fold
and there be no herd in the stalls,
yet I will rejoice in the Lord;
I will take joy in the God of my salvation.

Posted by JennyJohnson at 1:55 PM No comments:

When people die or have to move from home and aren't able to help sort their belongings, they leave behind an endless string of mysteries without the ability to explain their secrets.

Clearing out Aunt Ruthie's things at High Rock went far beyond Aunt Ruthie. She was just the last of the ones who made the place so special. While she made her own mark in the old house, she also left traces of those who came before. Grandsir Jim, Grandsir Tom, their wives, Granny and Granddaddy Cole, their children and spouses, and others.

There was a treasure trove of papers and books. Too many books to keep. Some we took, some we left for others. But it was the letters, postcards and greeting cards that couldn't be left behind. Just as they kept them, we kept them. Each one is a tiny window into a world gone by. Will we ever get a glimpse of what it inside of each small window? Will there be enough time before they become someone else's mysteries to add to those we leave behind?

One such puzzle that remains, with no one to ask for the keys to the questions it raises, was found written on an old postcard. 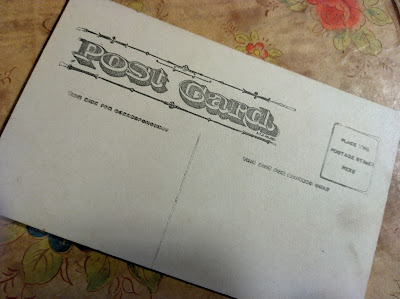 Wait for me in the Penny Arcade. I will wear a red necktie and a black derby hat. I have the money so will see all the sights. What do you say to a little automobile ride and a swell dinner. I'm ready—you just say where—I'm waiting--

That was all. No signature, no date, no return address. The card was old. Very old. Maybe from the early 1900s old. The script was legible but impossible to tell whether from a man or a woman. Except that the greeting and the message, the invitation, sounded masculine. And almost sounded like a dare.  The card was never mailed. Did it make its way to the intended some other way? Was it just wishful thinking? Was it even real? 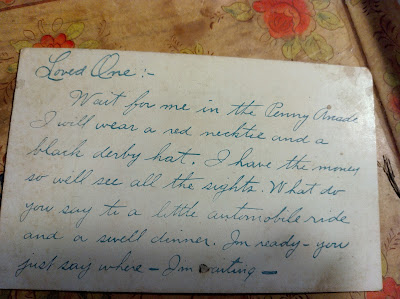 A lot has changed over the past five years at High Rock.

Some of the changes have been painful and sad. (We miss you, Aunt Ruthie!)
Others have been exciting and full of new hope as the old house takes on new life.

Much has changed. But not spring. 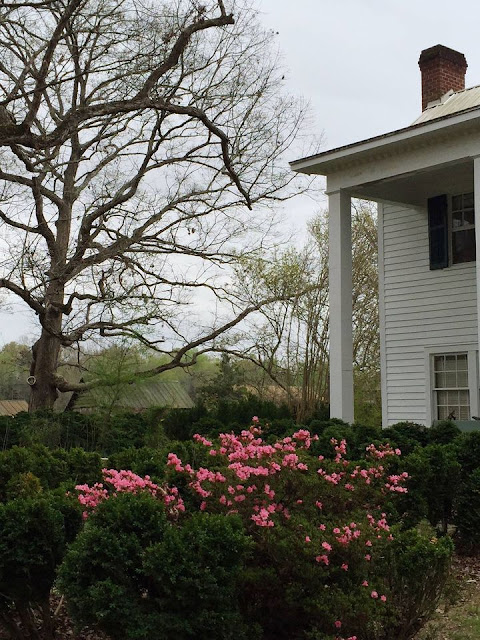 It just keeps coming...always lovely and right on time. 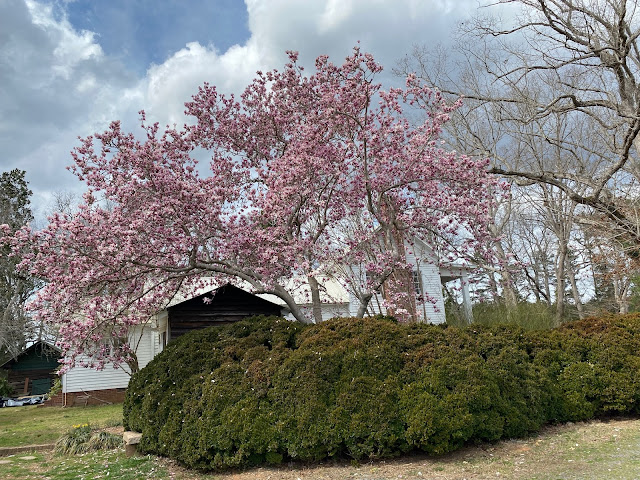 See! The winter is past; the rains are over and gone. Flowers appear on the earth; the season of singing has come, the cooing of doves is heard in our land. The fig tree forms its early fruit;
the blossoming vines spread their fragrance.
(Song of Solomon 2:11-13a)
Posted by JennyJohnson at 8:11 PM No comments:

The Legend of Clanton Christmas