The story goes that Granny and Granddaddy Cole left Davidson County some time after they were married in 1917 to make their own living on a farm in Bladen County, NC. Back home at the Cole home place in High Rock were Granddaddy Cole's parents, Grandsir Jim and his wife, Martha Jane. While Granddaddy had at least 5 siblings, it was he who was expected to come back home and take care of his aging parents and the High Rock farm. And so, the story goes, they loaded their livestock on a train and home they came. 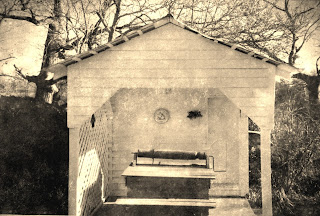 Granny's mother-in-law was not well, and died in 1926. Her father-in-law lived on at High Rock until 1934. One of Granddaddy's siblings, Mary Dell (or Aunt Mayme, as we knew her), had made her way to Columbus, Georgia, where she taught business courses in high school for years. She came home to the farm during the summers, but not always at other holidays.

Recently, two letters written in early 1928 were found  in some family papers, one written by Granny Cole to her sister-in-law, Mayme, in Georgia, and one by Ruth, Granny's oldest daughter and Aunt Mayme's niece.

1928 came on the heels of Lindbergh's transatlantic solo non-stop flight from the U.S. to Europe. Joseph Stalin had just taken control of Russia, and Ford replaced the Model T with the Model A. Calvin Coolidge was President, and a wood fired kitchen range, similar to the one Granny cooked on for another 25 years, could be bought for $69.85.

Rural North Carolina was a place where electricity was not universal and telephones in the home were a luxury. Farming was the occupation of necessity there, and the farms were already on the road to the Great Depression. 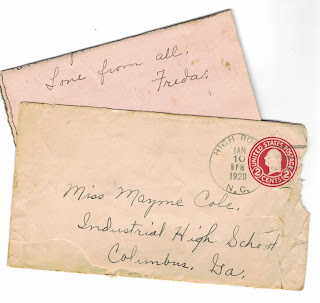 High Rock, N.C.
Jan., 1928
Dear Mayme,
I want to thank you for the many nice things you sent to us Christmas. I know I have been terribly slow about writing, but we are all very thankful to you just the same. You should see Miss Prissy Pris with her pretty gloves on. [Likely she was talking about her youngest daughter, Virginia, age 4.] The birthday party was quite a success I think. Ruth and Grandsir enjoyed it and the decoration was so pretty. One of the pretty green candle holders was broken so bad I could not use it. Otherwise the box was in good shape.
Mayme did you have a joyful Christmas? We did not have any company so everything was very quiet. I gave Ruth her little party Christmas eve and the candles were beautiful.
Well I have lots of things stored back in my memory to tell you but they seem slow about coming to me just now. I heard that Miss Eliza Reid is married but don't know if it is true. And Mr. Jim Smith was married to a young lady that nursed Mrs. S. They were married in September. Now you see you let another good chance go by. ha. [Aunt Mayme never married.]
Your father is well, we have all been well this winter except slight colds. We had some of the coldest weather I ever experienced last week. It was so cold for 6 days and nights that my milk would freeze up solid in the kitchen and eggs left on the table would freeze and burst. We still sell some milk, deliver about 3 times a week.
Most all the people have left and they are tearing down and burning up the camp as fast as possible. [The High Rock farm is located just downriver from the High Rock Dam across the Yadkin River. This dam was built in 1927. The camp, to which Granny refers, was most likely the camp inhabited by many of the laborers working on the dam. By the middle of April, 1928, High Rock Lake reservoir had been filled.] 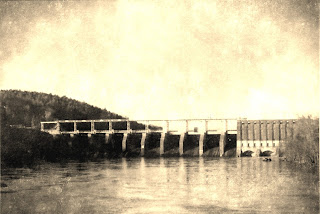 We butchered again last Tuesday. Albert's hogs did very sorry this year but we have a good supply of meat at that. I canned 10 quarts of sausage and we have 3 pigs to kill yet. So prepare thyself to cook again with me next summer.
Grandsir said tell you the books were jut fine he has finished Jane Eyre and is reading the Bible Stories now. Said he thanked you ever so much for them.
Mr. George left the first of December.  He went to Mt. Holly, N.C. [Mr. George was likely a laborer on the dam who boarded with Granny and Granddaddy at High Rock.]
The children are doing very well in school. They love to go but we sure do hafto hustle in the mornings. The truck comes so early. Ruth has some kind of work to do at nights. She had 44 sentences to write for Monday.
Brooks is still in the first grade but he said tell you he has finished Baby Ray and is reading in a new reader now.
Excuse this fancy writing paper. Mr. George gave it to me and you know I just must use it. Write to us soon and please don't wait for me to answer.
Love from all,
Freda 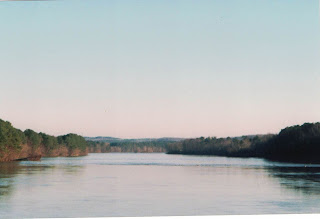 And then there was Ruth's thank you letter also, post marked Jan. 25. [She was about 9 at the time. Brooks, her brother, would have been a little younger.]


High Rock, NC
Saturday
Dear Aunt Mayme.
Guess you thought I was never going to write you. We are just fine Grandsir has gotten well and at work again. President Davis is dead. He fell dead at High Rock yesterday. Was quite sudden as he had not been ill. [We have no idea who President Davis is...probably a pet.]
I want to thank you for all the nice things you sent us Christmast it was so nice of you I am trying to learn fast and Brooks really is learning fast he will be writing you a letter soon.
Love
Ruth 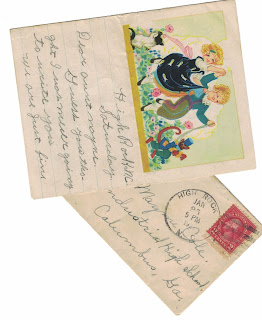 Every good gift and every perfect gift is from above, coming down from the Father of lights, with whom there is no variation or shadow due to change.  (James 1:17) 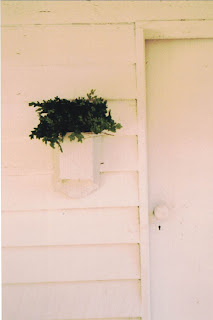 Posted by JennyJohnson at 9:18 PM No comments: