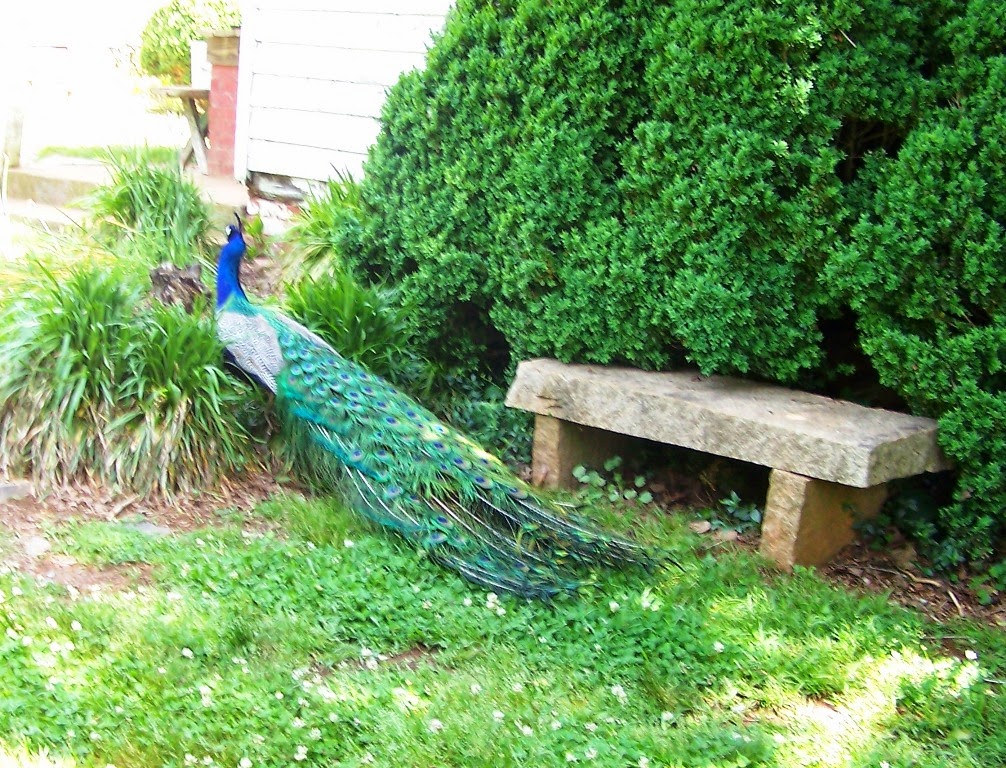 Spectacular is a word I would use to describe the peacocks of High Rock. I’m not sure when the ancestors of today’s breathtaking birds first came to the farm…perhaps in the 1950s... but they have been long term residents of a place that has seen the other domestic fowls—chickens, turkeys, guineas—come and now go. I Kings 10:22 tells us that King Solomon had peacocks brought to his kingdom every three years on ships from his own navy. I’m fairly certain the peacocks of High Rock didn’t arrive in such a dramatic fashion, and that they were the doing of Granny Cole, herself. 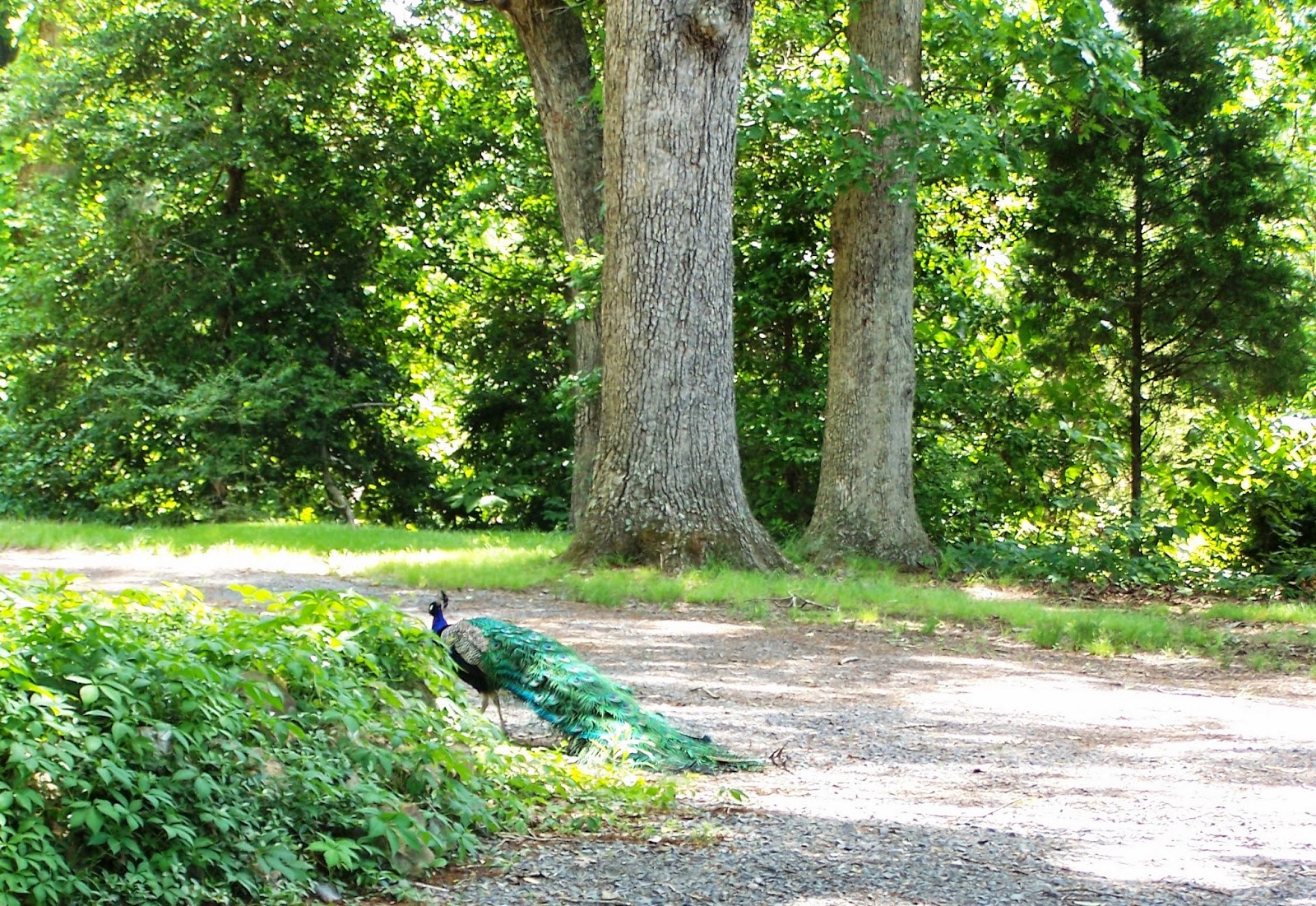 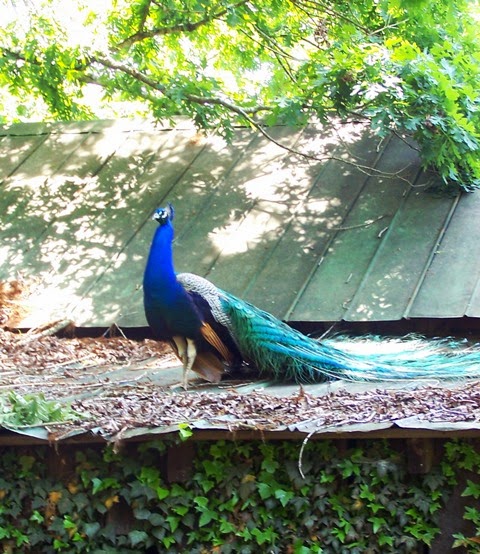 While I never asked her, I think Granny had a vision of how the iridescent greens and blues of the magnificent necks and tails of the male birds would dress up the landscape of her home. And she was right.


Granny was also a bit of an entrepreneur, so she might also have had the notion of raising the birds to sell. (There is a story…true, I think.. of selling High Rock peacocks to the Biltmore Estate.)


But I do know that for a long, long time…peacocks have called High Rock home.


When visitors drive up the cedar lane to the High Rock house, they are often greeted with a raucous cacophony of calls that make the weak of heart want to turn around and flee. A group of adult peacocks make better watch dogs than watch dogs themselves. I’ve seen more than one grandchild go into a frenzy of fear until he got used to the strange noise. But while their calls may be bloodcurdling, I’ve never known them to be aggressive unless defending themselves, in which case, the offender may forever bear the resulting scars. 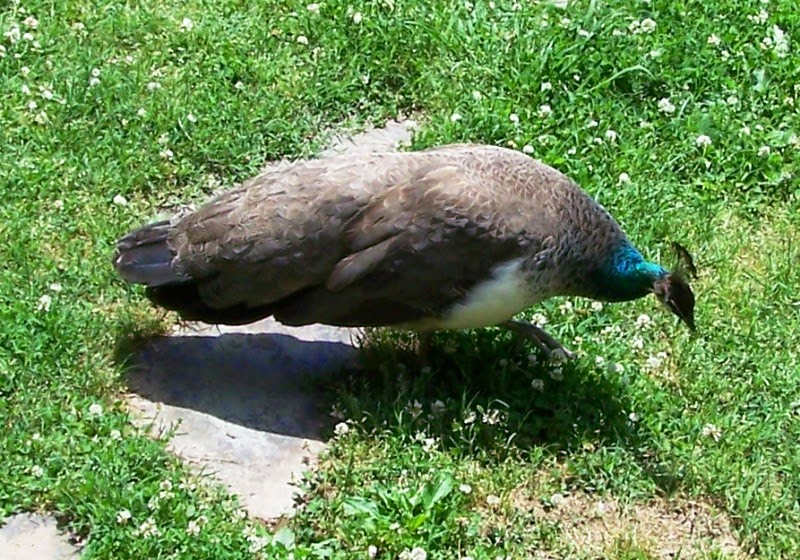 As is often the case in the fowl family, lady peacocks are less flashily dressed than their male counterparts. 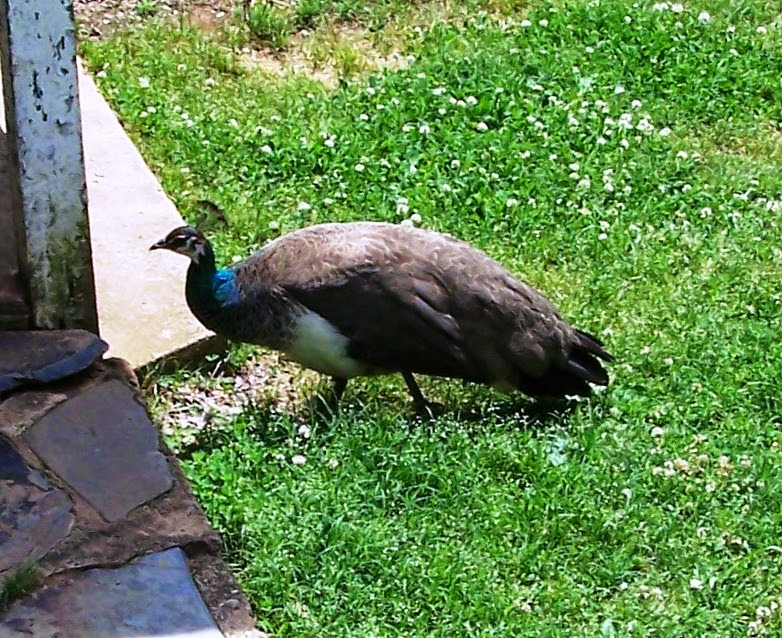 While their necks are a lovely green and their top notches are intact, they lack the stunning  yellow, brown, green and blue sweeping tails with the eerie eye patterns of their menfolks. It is the males that strut, rattle and fan their magnificent  tails, it is the ladies that go modestly about the business of sitting on the eggs and caring for the young—often facing life threatening dangers to themselves and their babies from predators of both the day and night (foxes, owls, hawks, possums, and snakes). 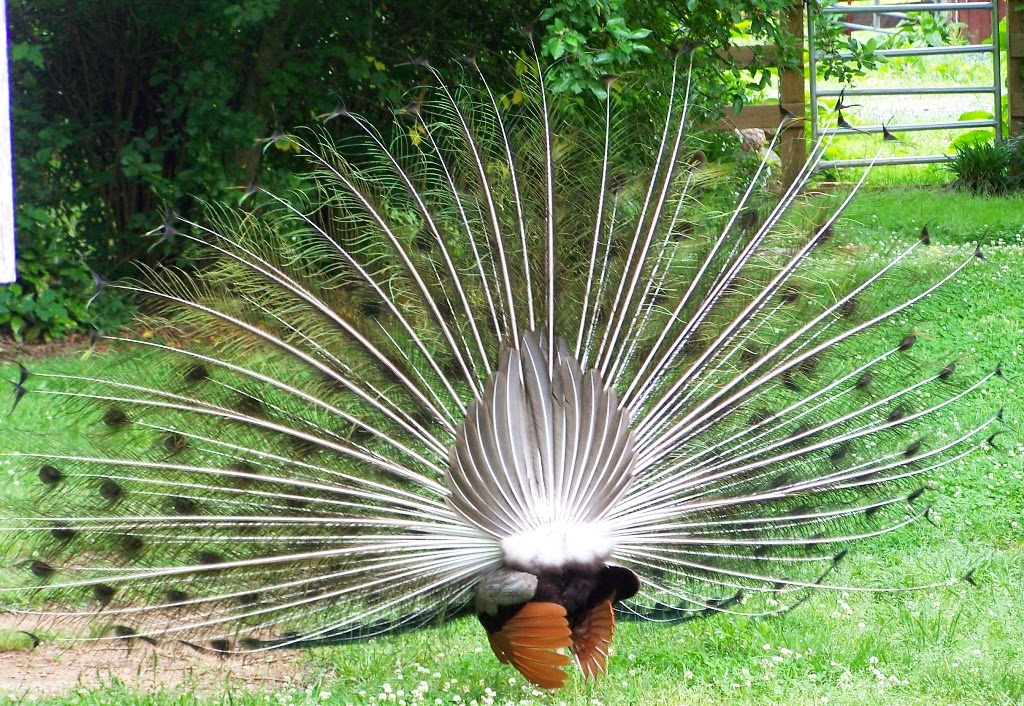 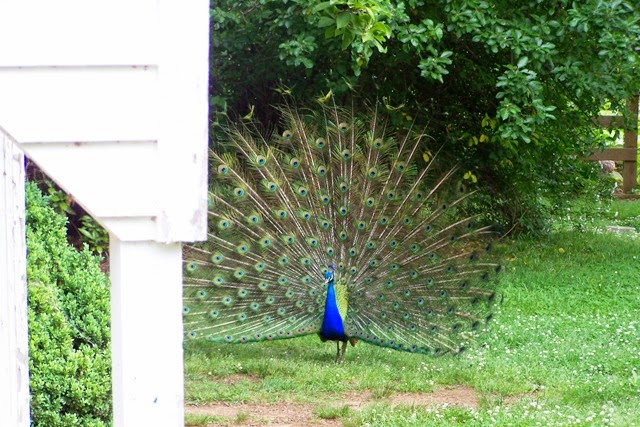 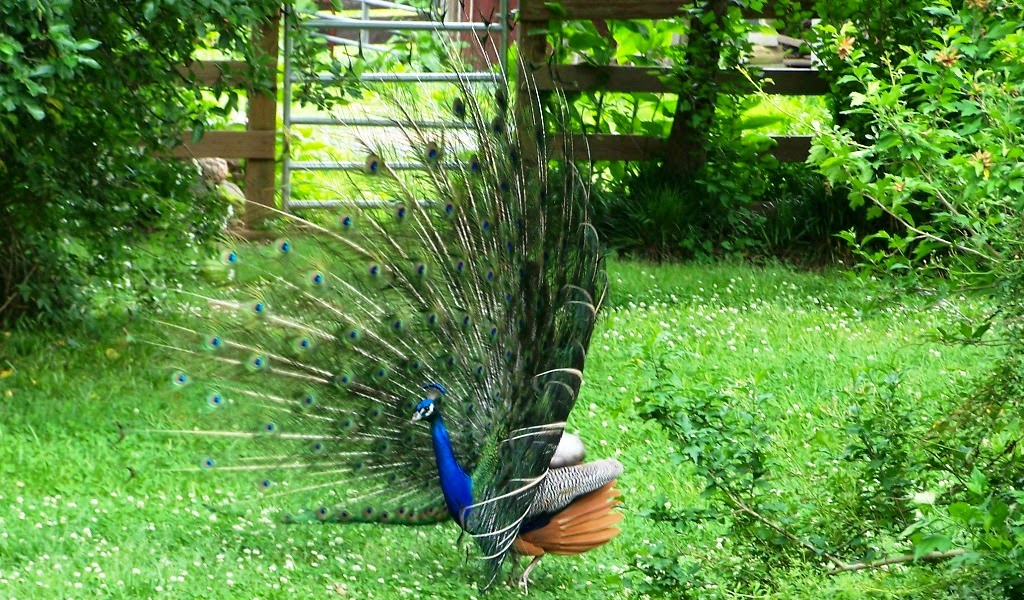 Even though High Rock has gone through many changes over the years, it will be a sad day, indeed, when the screeching “Hee—Yah” of its peacocks is heard no more. I’m happy to say, that time has not yet come. 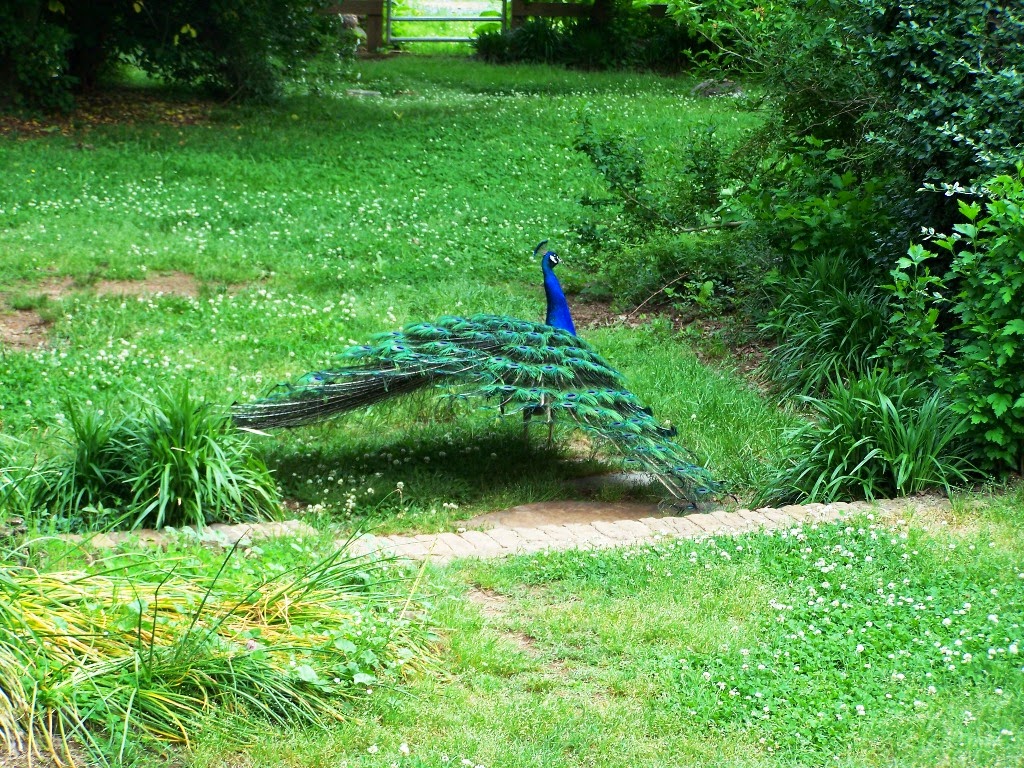 Then the Lord spoke to Job out of the storm. He said:
Gavest thou the goodly wings unto the peacocks?
or wings and feathers unto the ostrich? Posted by JennyJohnson at 7:44 PM No comments: