On a high post at the side of the drive at High Rock behind the well house stood the Farm Bell. It was rung by a pull hanging from the yoke.
One might suspect the greatest use of the bell was to call folks in from the field or garden to the dinner or supper table. That might have happened on some farms, but not so much on the Albert Cole Farm.
Granddaddy knew when it was time to come in for meals. He had a routine that didn't depend on the bell. After dinner (lunch) he would stretch  out on the old chaise in the middle of the kitchen for a brief nap. After about 30 minutes, he was gone again to his plow or whatever he was working on that day. After supper, he would listen to the radio--

(maybe Johnny Weaver or the Great Bolo on Championship Wrestling or Gunsmoke or Dragnet). Granddaddy Cole usually turned in about 8 or 8:30 because his next day came early.
No, the Farm Bell at Granny Cole's was an alarm bell. The big old No. 3 or larger bells could be heard anywhere from 3/4 of a mile to several miles across the countryside. With no cell phones or phones at all for many years, there needed to be a way to alert the family---and the neighbors too at times---that help was needed. Come quick!
The bell at High Rock no longer rings. It stood about here 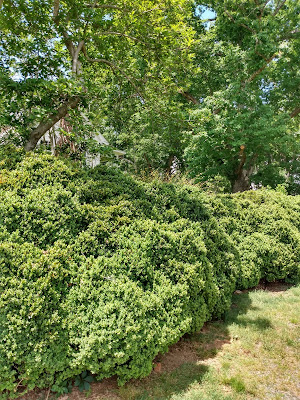 but legend has it that Bid's husband, Jimmy, ran into the pole with his car and knocked the old bell to the ground where it broke into several pieces.
While we can't still hear the High Rock bell, we can still get a taste of what it sounded like. Bid's daughter's husband resurrected the one from Bid's house at High Rock and hung it on his farm. This is what it sounds like.
Blow a trumpet in Zion; sound an alarm on my holy mountain! Let all the inhabitants of the land tremble, for the day of the LORD is coming; it is near,
(Joel 2:1)

Posted by JennyJohnson at 8:04 PM No comments: