I’m looking at the representative Thanksgiving symbols sitting on the mantle in our den as I type this…a Pilgrim lady and gentleman, each clutching pumpkins and other samples of the bounty of the season. 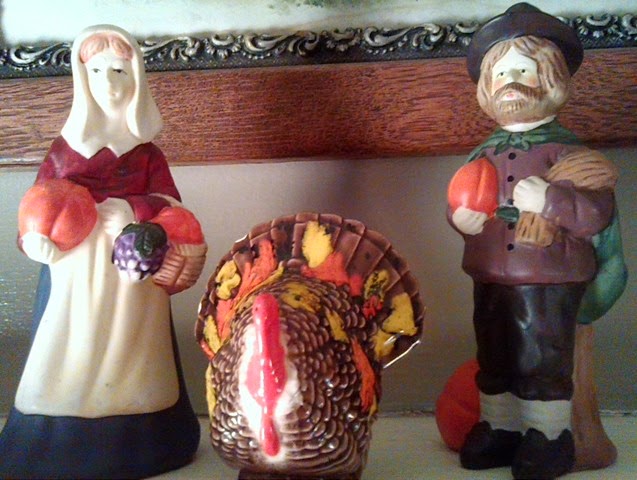 Between them stands the ubiquitous turkey gobbler, this one not looking very endangered and dressed in somewhat strange colors for the turkeys in real life I have known.  (I learned a long time ago NOT to accompany Granddaddy out in the farm yard to deal with the Thanksgiving turkey…a bit too violent for my tastes.)

Turkeys and Pilgrims all have their places, as do pumpkins and other signs of the holiday. I’m a follower of holiday decorating, having watched Granny Cole place little candle Pilgrims on her Thanksgiving table.


My personal “turkey” theme continues in various settings around the house as fat, stuffed cloth turkeys find their roosts or nests, waiting for the big day, safe in their knowledge that their cotton stuffing will never make it to the dinner table.

Thanksgiving decorations notwithstanding...due to family constraints, I’m skipping traditional Thanksgiving celebration this year.
Under the circumstances, I don’t have a problem with that.


But the “Thanks” part, I don’t want to miss out on that.

#Giving thanks is not optional. We are commanded to do so.

Give thanks to the LORD, for he is good; his love endures forever. (I Chronicles 16:34)
And whatever you do, whether in word or deed, do it all in the name of the Lord Jesus, giving thanks to God the Father through him.  (Colossians 3:17)

#Why give thanks?  Benefits to us and to others.


The LORD is my strength and my shield; my heart trusts in him, and I am helped. My heart leaps for joy and I will give thanks to him in song. (Psalm 28:7)


All this is for your benefit, so that the grace that is reaching more and more people may cause thanksgiving to overflow to the glory of God.  (2 Corinthians 4:15-16)


You will be made rich in every way so that you can be generous on every occasion, and through us your generosity will result in thanksgiving to God.  This service that you perform is not only supplying the needs of God's people but is also overflowing in many expressions of thanks to God. (2 Corinthians 9:11-12)

#When should I give thanks?
give thanks in all circumstances, for this is God's will for you in Christ Jesus.
(I Thessalonians 5:18)


Who is worthy of my thanksgiving?
I will give thanks to the LORD because of his righteousness and will sing praise to the name of the LORD Most High. (Psalm 7:17)


Let us come before him with thanksgiving and extol him with music and song.  For the LORD is the great God, the great King above all gods. (Psalm 95:2-5)


Praise the LORD. Give thanks to the LORD, for he is good; his love endures forever.
(Psalm 106:1)

I'm sure there's a lesson in that.
Posted by JennyJohnson at 12:58 PM No comments: 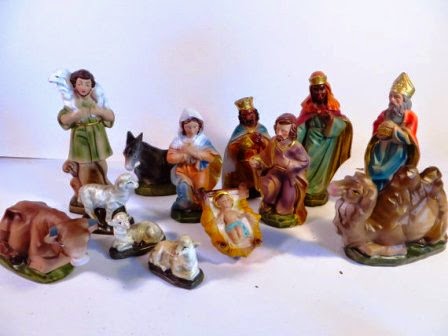 One of my favorite Christmas decorations are Nativity sets or Manger Scenes. I'm amazed at how many depictions of the birth of the Savior are available--fancy collectable Fontanini figures, carved olive wood treasures from the Holy Land, even tiny creche scenes to go with Christmas house displays. I have a special set made of yarn and pipe cleaners---a gift from one of my children.
Over the years, I've gathered several pieces I love. Two sets stay out all year round---a dark brown pottery one and an odd assortment of vintage chalkware figures---including two well worn angels standing watch over the little family, the shepherds, visiting wise men and a variety of animals.
Angels...one of the most recognizable symbols of Christmas. But that's not the only role these heavenly beings fill. I believe, (and I'm not the only one--David Jeremiah and Billy Graham), that one of the important jobs of angels may be to accompany believers from here to their heavenly home when their time on earth is over.  What a comforting thought!

The Christmas season is upon us. 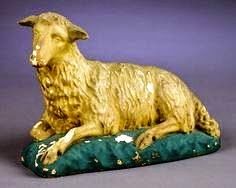 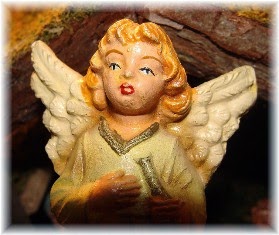 The time came when the beggar died and the angels carried him to Abraham’s side.
Luke 16:22 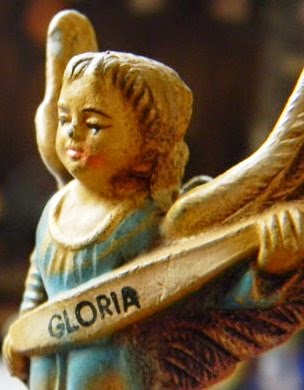 For he orders his angels to protect you wherever you go.
Psalm 91:11

Praise the Lord, you angels of his, you mighty creatures who carry out his plans, listening for each of his commands.
Psalm 103:20

Posted by JennyJohnson at 7:52 PM 2 comments: 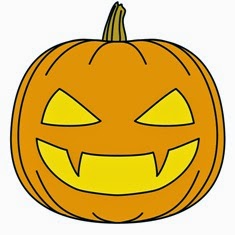 Halloween has a great marketing plan. It feeds on our fears.

While a lot of the hype of Halloween is made up, most of us do have a significant set of real fears. As Christian believers, we are not exempt from fear.

The Old Testament story of the return of a group of Jewish exiles to their homeland after a long enforced absence has a great lesson embedded about how to handle our fears, which sometimes are very real.
The exile was long and lonely. It lasted seventy years, more than a generation, and the ancestral home of the Israelites was five hundred miles away. No doubt some of the captives finally resigned themselves to their new home in Babylon and decided to fit in as best they could. Some likely even prospered. But for others, being a stranger in a strange land was never to be accepted and there was always the call of home.
So when Cyrus of Persia assumed the Babylonian throne, God moved his heart to make this surprising proclamation: 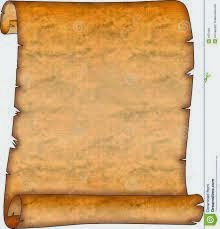 The waiting ended. Imagine the exhilaration in the hearts of those who prepared to take the long journey home. Imagine the apprehension. The trip alone would take months. Would they all survive, this company of more than forty thousand travelers? And what new worries might their destination hold? The desolation of their homeland? Its occupation by those who had no interest in welcoming the former owners back? How would they live? Where would they live?
Still, wasn’t it their LORD who was leading them? Was He not able?  They traveled on, and at last they were home.
“When the seventh month came and the Israelites had settled in their towns, the people assembled together as one in Jerusalem…” and a first order of business was “...to build the altar of the God of Israel to sacrifice burnt offerings on it, in accordance with what is written in the Law of Moses the man of God” (Ezra 3: 1-2).
And here’s the part I love: “Despite their fear of the peoples around them, they built the altar on its foundation and sacrificed burnt offerings on it to the Lord, both the morning and evening sacrifices.”
Their fears were justified, and the threats were well founded. Surrounding neighbors were hostile to them and to their God. Nevertheless, “Despite their fear...,” the Israelites did what they were supposed to do and in the manner it was to have been done. They didn’t wait until the threat had passed or until their fears subsided. They were obedient to their God in spite of the threat and the fear. They did it anyway, not knowing what the outcome would be.
What do we fear? Do we fear losing face with others, losing our jobs or security, losing our influence? Do we fear facing situations over which we have no control or losing our freedoms? Do we fear losing our lives or the lives of those we love?
Hebrews 13:6 reminds me, “So we say with confidence, ‘The Lord is my helper; I will not be afraid.  What can mere mortals do to me?’ ”
The Israelites kept steady on in their mission to rebuild God’s temple regardless, and a few months later, the foundation was laid. What a momentous occasion. The priests and Levites “with praise and thanksgiving … sang to the LORD: “He is good; his love toward Israel endures forever” (Ezra 3:11).
So excited were the people at this milestone that they “gave a great shout of praise to the LORD,”  and some were moved to tears and others to joyful shouts.  Despite their former fears, the Bible says that “the people made so much noise… the sound was heard far away (Ezra 3:14).
Have you ever been so afraid that you felt you had to whisper or walk softly so that the object of your fear would not “hear” you? I know what that kind of fear feels like, whether real or imagined. The fear that had been felt by the Israelites was real and justified, but as a result of their obedience to God, it sounds to me like their fear was replaced by great and loud rejoicing.

Yes, they continued to face opposition and barriers, both from within their own ranks and without, as they began to rebuilt their decimated city of Jerusalem.  But so faithful was their God that when the wall around the city was completed, Nememiah reports, “ When all our enemies heard about this, all the surrounding nations were afraid and lost their self-confidence, because they realized that this work had been done with the help of our God” (Nehemiah 6:16).
What an interesting turn of events. Now the fear rested with the Israelites’ dreaded enemies.

There’s a lesson in that.

Posted by JennyJohnson at 5:55 PM No comments: