Have you ever felt your life was insignificant and unimportant-- as if few people would even notice if you were to disappear?  Whether realistic or not, most of us have felt that way at some time. No doubt some folks live there most of the time.

I never met Carolyn Jane, but I knew her. Her story was part of the High Rock story. Her parents were storekeepers in the tiny location where they lived; I remember them from long ago. Carolyn Jane was born in July of 1928, the second oldest child of at least 2 brothers and 2 sisters, one of whom still lives near where they grew up in High Rock.

Carolyn Jane never married; she never had children. She missed out on most of the things we think are important sources of joy in our early adult lives. I heard about her from Granny Cole, who lived in the same community and was a neighbor. Granny told me how sad she felt on visiting Carolyn Jane in her bed in a little room of the store where her family lived and worked. Carolyn Jane had a terminal illness, and just after the New Year in 1949, she died.  Carolyn Jane only lived to be 20 years old. 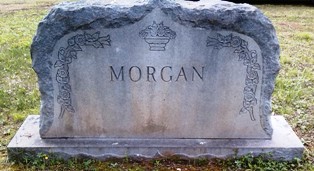 Did this one short life of 20 years matter? There were more than 26,200 live births in North Carolina in 1928. Carolyn Jane’s was one of them. There were over 31, 000 recorded deaths in our state in 1949. Hers, in January, was one of the first.  It is highly unlikely that you would ever know about her, were it not for this brief writing. No doubt her family mourned, and any who are left, may mourn still. Apart from that, and a few friends, old now themselves, who would care?


Carolyn Jane’s short life was no mistake and not without His purpose. All of her days were ordained for her before one of them came to be:


13 For you created my inmost being;
you knit me together in my mother’s womb.
14 I praise you because I am fearfully and wonderfully made;
your works are wonderful,
I know that full well.
15 My frame was not hidden from you
when I was made in the secret place,
when I was woven together in the depths of the earth.
16 Your eyes saw my unformed body;
all the days ordained for me were written in your book
before one of them came to be.


The same is true for you and for me.


When I met Archie Smith a few weeks ago [see Finding Archie Smith, May 3 blog post], he told me he had worked on a church in High Rock some years back. I knew the place, now deserted. Out of the blue, he told me, “Carolyn Jane Morgan was the first person to be buried there.”


I had found her. 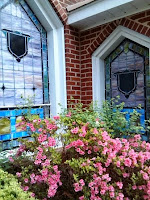 This was not Granny’s church he was talking about, and I’d never explored its cemetery, but I did that day. It’s on a dead end dirt road right at the foot of a mountain. The church yard is quiet, the stained glass windows beautiful, the small cemetery well kept.

Carolyn Jane’s grave was easy to locate on the first row of graves. 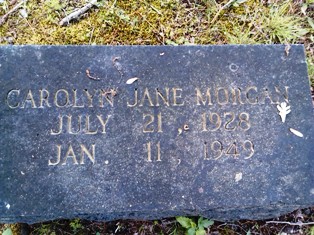 The dates on the stone told me she was actually a little older than the teenager I had thought her to be. I wish I had a picture; surely there’s one in an old annual somewhere. I think I’ll try to find it.

Psalm 116:15 says, “Precious in the sight of the Lord is the death of his saints.” I know that being buried in a churchyard doesn’t make you a saint, and I don’t know her spiritual heart, but I can hope that I will meet her in person someday in Heaven. 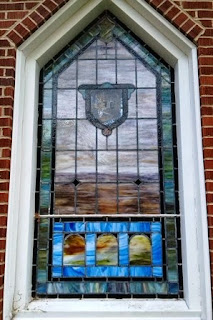 Posted by JennyJohnson at 5:39 PM No comments:

Update to this post: There was a report in the Davidson Dispatch newspaper in early January of 2020 that this early NASCAR veteran, Mr. Archie Smith, had passed away: Losing Archie Smith  The last of this inaugural class of drivers is now gone.
I thought #25 was the last Granny’s Pantry story. I was wrong.

Little did I know, when driving around looking for a thrift store in the tiny town of Denton, NC, that I was about to meet NASCAR history. Denton is the closest town to High Rock, where Granny Cole lived. 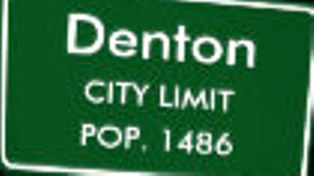 On this Saturday in April, we had just had lunch at the little restaurant that Granny and Granddaddy Cole used to own back in the day; I was determined to find some place to ramble around in.

And there it was, on South Main, set back from the street and with just the right touch of “junkiness” to be intriguing.
The proprietor was a senior citizen with a lively spirit, talkative personality and the most beautiful white hair. I noticed that he had racing memorabilia tucked among the other finds for sale and he noticed that I was gathering some of them up to purchase.
“I used to race cars,” he said. That piqued my immediate interest.
“Where?” I thought he would say some local track like maybe Bowman Grey or Caraway.  No.
“I used to race NASCAR. I was in the first NASCAR race at Charlotte in 1949. Out of all the drivers in the race, I’m the only one who is still alive. My parents had to give special permission for me to race, due to my age.”
“What did you say your name is?”  Now I’m really interested, as NASCAR has been my spectator sport since 1992.
“Archie Smith.” 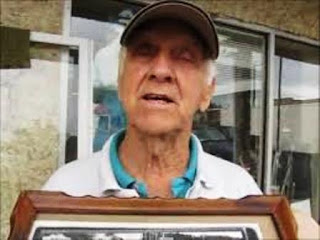 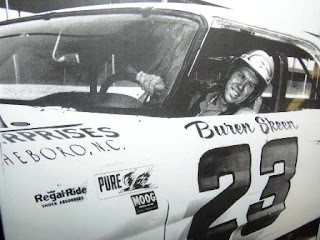 “Yes, he was my friend. I had breakfast with him before he left to go to Darlington. The funeral home here asked me to go for him after he died a few days after his wreck.
Oh, my. I was talking to History.
“Let me show you something,” and he picked up the same vintage racing picture collage I had picked up when I first walked into his store. It was stuck up on the counter with some other things…easy to miss.
“This picture is Richard Petty’s daddy, Lee, and I was right behind that car there. And here is Lee Petty’s shop.”
H.I.S.T.O.R.Y.
We paid for our purchases, he walked us to the car, I introduced him to my husband and we drove away from The Best Thrift Store Experience I Ever Had.
Naturally, I  Googled “Archie Smith—NASCAR”  immediately. Yep, he’s the real deal. Here’s what I found:


The inaugural season of NASCAR Strictly Stock racing was 1949 and the inaugural race was at Charlotte Motor Speedway on June 19th. Archie Smith came in 6th  (the famous Curtis Turner was 9th and Richard’s dad, Lee Petty, was 17th).  Archie drove a '46 Ford, and his share of the purse was $175. The winner got $2000. (The whole purse was $5000). Archie’s next race was on September 25th at Martinsville. He came in 10th  (right behind Curtis Turner).  You can view an interview with Mr. Smith about that race at: https://www.youtube.com/watch?v=swj2TKNJyTA 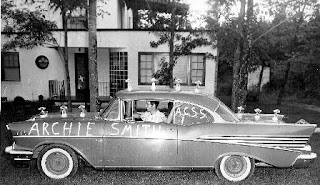 I found out that Archie Smith preferred drag racing to NASCAR. He drove a ’57 Chevrolet to over 200 victories in that sport.
Mr. Smith became a builder and now, well into retirement, runs a thrift store as his hobby. He said that he still gives autographs. Real NASCAR history fans will want to stop by for a visit.
Archie Smith has been called, “the reigning granddaddy of NASCAR.” **

Wisdom is with aged men, With long life is understanding.  (Job 12:12)

Posted by JennyJohnson at 6:54 PM No comments: